What’s involved in Getting in The Groove?

Many people have become excited about Ron’s discovery for a lot of reasons. Mostly, it’s because they’ve seen a ton of stuff over the years that was either too demanding of their cash and/or time for too little return, would cause damage to an engine, or (most usually) simply wouldn’t work. And seeing thousands of videos of huge mileage and power gains just makes a person go all a-twitter! Moreso when they realize it actually makes the engine and engine oil last longer while extending the life of the emissions parts, too! (such as the O2 sensors and Catalytic Converters).

The most common questions are based out of ignorance. My Number One Goal is to educate, and in that, remove a great deal of the fear they experience when dealing with their engines. Here I am proud to say that God has been very kind in giving me a gift of communication as well as a native understanding of these intimidating systems.

First, The Gadgetman Groove is not a part. It’s not a device. It requires no electronics, no tuning, and no tweaking. It never wears out, and improves the dynamics of every gasoline engine upon which it has been applied. You simply modify or exchange a single part that ALL gasoline engines share: the throttle assembly. In most engines, it’ll look like one of these: 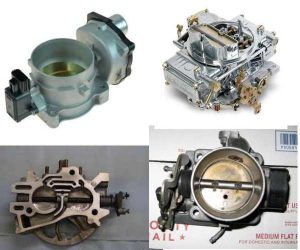 Tens of thousands of engines have received this modification-either through my hands, or the hands of my Gadgetmen in Training. These people number in the hundreds, and have all started with the Personal License Program, with many of them showing tremendous success with their first modifications.

One such man is Mr. Michael Lee, of Foreston, MN. He purchased his license, and has of the time of this writing used it to modify almost 20 engines, and has earned thousands of dollars, working part-time from home. And that has helped his young family a LOT! (they’re going to have a MUCH happier Christmas this year!)

Here’s a video he made to tell people about his discovery of “The Groove”:
(watch what his six-month old boy does at about 6:30!)

And he has another “little pumpkin” coming into his family this July!
Send him a Congratulations note!

Oh yeah! By the way, he’s now sporting around in that massive beast at over 17 MPG’s! That’s over 100% INCREASE in his MPG’s, and WITH MORE POWER!

If you live near him, I’m SURE he’d love to hear from you! Email him by CLICKING HERE. He’ll tell you all about what The Groove has done for him and his family, and he is one of the finest men I have ever met.

The second thing people ask is “What’s involved in changing out the throttle body?” To that, I answer “It’s sooo easy!” but they can’t believe it’s easier than changing the Spark Plugs in most modern cars!

Here’s what happened when I asked my beloved to volunteer to be my guinea pig for a video demonstration.
(and almost every throttle body is this easy to replace.)
It took her only 20 minutes, and she didn’t know which end of a screwdriver to hold onto! 😉

Even so, I have talked to hundreds of people that simply don’t feel qualified to work on their own engine. Quien Saavy. If you’ve never done something, it can appear pretty daunting, given how confusing they make the engines look nowadays. But if you want to hire someone, it would only take a professional mechanic (or your neighborhood Handyman!) about a half hour, so labor costs will be very low.

Here’s what they will need to do to complete the modification.

If you have any more questions, just call Ron at 406-422-3291 and he’ll do his best to answer every one with patience and professionalism.

(For a complete run-down of what the modification process may look like, see the Whole Process Page.)

To see what I do for every order, LOOK HERE!

We are always available to assist you. Feel free to contact us through one of the following contact methods listed below.

Thanks for subscribing! Please check your email for further instructions.